In this week’s LEADER Spotlight, we look at how three ILDN members from across the Country, and Clann Credo – Community Loan Finance assisted the ‘Leave No Trace’ project Ireland.

For many, lockdown has sparked a reconnection with their local surroundings and environment, resulting in a renewed appreciation for the natural treasures on our doorstep.  Local parks, forests and trails all saw an upsurge in footfall and activity. But that increased interaction with the local environment also brought with it increased impacts.  This is where Leave No Trace Ireland comes in.

Leave No Trace is the internationally recognised programme that promotes responsible outdoor recreation through education, research and partnerships to inspire positive behavioural change. Officially launched in 2008 Leave No Trace Ireland is based today in the picturesque town of Westport.

By encouraging people to understand and respect the areas they visit as well as the responsibilities that come with accessing the countryside and outdoor spaces, Leave No Trace Ireland’s programme is central to providing clear guidelines on personal responsibility and enjoying the outdoors with care.

The organisation has grown rapidly in Ireland over the last several years with over 300 members, including individuals, communities, organisations and state agencies and national bodies including Sport Ireland, Coillte, Failte Ireland, the Department of Rural and Community Development, the NPWS, the OPW, Inland Fisheries Ireland and Waterways Ireland.

One key area of the organisation is engagement in education and schools-based training on conservation and environmental issues, with programmes delivered across the country by a team of accredited Leave No Trace trainers. To date the group’s work has received national and international awards and recognition.

Leave No Trace Ireland sought support through LEADER and from Clann Credo for innovative new initiatives including a pilot Tidy Towns Biodiversity programme and customised training for community groups in Donegal involved in water sports, mountain biking, trail and hillwalking, and community events.

For more details on our members visit: 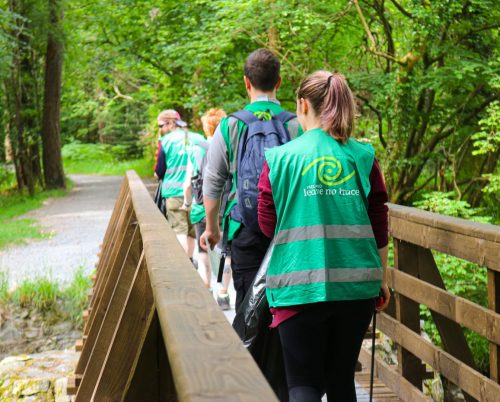